Best Pastrami in the World - Katz

Posted by The Thirsty Pig on January 17, 2009
This is the place where Meg Ryan had the famous scene in When Harry Met Sally. Among other things, this place has a pretty good Pastrami and Corned Beef Sandwich. It is also New York's oldest deli. Not just good, but probably the best in the world.

When I first got there, there was a long line going out the door. Everyone was getting a ticket or something. I guess it was just an ordering ticket. Kinda weird. Then everyone - mostly tourists, stood behind 1 line to make an order. My friend drags me to a shorter line and says . . . those tourists don't know how this system works.

Then the sandwich arrives. This thing is hugh!. The bread is just right as it holds the meat with the slathered mustard. The sandwich is large enough to split for two people. I only wish I had a chance to try the other sandwiches, too.

This place is so good, that one of my friends, who recently moved to New York, went to Katz twice a week for a couple of months. I've had the thin sliced pastrami from the Hat, Johnnies, Tops in Los Angeles, and the New York style from Canters and Langers. . . but they all don't compare to Katz. Not at all. Hand down. A sandwich at Katz, means I win. 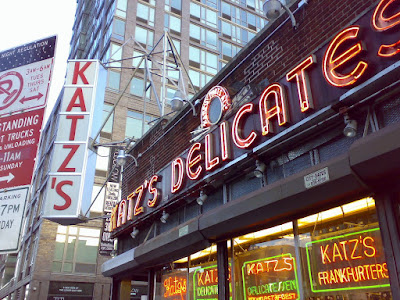 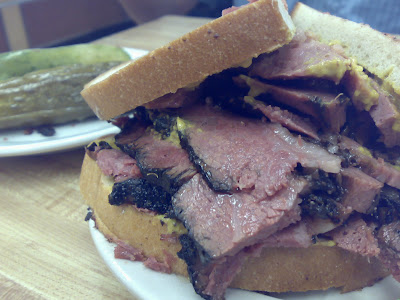