Posted by gammagod on January 30, 2009
this is my first post, as recent dining experiences have been less than fruitful. we headed up to mammoth for a weekend of boarding. on the way back we stopped at a popular breakfast joint called breakfast club. yes it's a cute and punny name. kinda makes me wanna barf. fortunately, the food does not.
it's got all your basic breakfast fare- omelets and such, with a slight mexican bent. a pitcher of water awaited us as we sat down. i like that. coffee was served almost immediately. also good. they have what looks like very good bakery items in the front counter, none of which i've sampled. i was there for the corned beef hash.
first, a bit of background. i usually eat fairly healthily, but breakfast is a weakness. morning, afternoon and especially late night. i load up and file the guilt away for another meal. okay, back to the meal. now usually, corned beef hash is a greasy salty mess of some chewed up meat and potato substance that reminds me of dog food. here though is a hash from the gods. meaty chunks of real corned beef are mixed in with celery, onion, mashed up potatoes and who knows what else. i forced myself to eat it slowly so i can savor each bite. this place has truly ruined this dish for me as i can never order it anywhere else ever again.
the rest of the meal was not bad either. eggs are eggs. the home fries and hash browns were good but not spectacular. the chicken fried steak was disappointing. the meat was thin and chewy and the breading was a bit soggy. the biscuits and gravy were very good. the biscuit was fresh-baked and huge. the gravy was thick and hearty, with the requisite bits of ground pork in it. as a side dish it's a one way trip to coma-ville.
this place can get crowded, and the service is, umm, leisurely. still, i can't think of a better place to top off a weekend in mammoth.
Breakfast Club
2987 Main Street
Mammoth Lakes, CA 93546 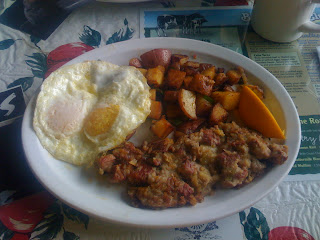 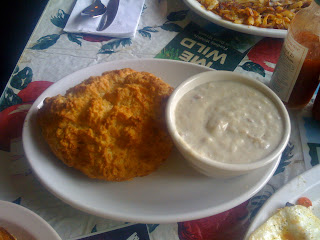 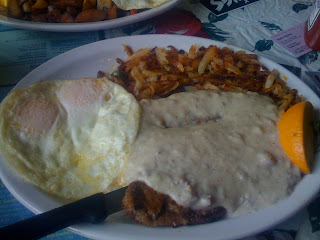