Posted by The Thirsty Pig on July 24, 2009
Late last year, I went to the Los Angeles Barbeque Festival at the Santa Monica Pier. Held on a nice sunny September day, the 13th and 14th to be exact. Unfortunately, I didn't know that they moved this year's, 2009, to May 9th and 10th.

I was searching through my pictures library and came across some of these pictures. The top picture are Beef Ribs from Mr. Cecil's California Ribs. I was never a fan of Beef ribs. I always thought beef ribs were tough & chewy and didn't have the flavor of baby back ribs. Then I tried Mr. Cecil's. He doesn't even claim to be barbeque'd. Yet, they are grilled tenderly. Taste wise, they are awesome. I always tell people that Mr. Cecil has the best beef ribs around.
The second picture is from LC's BBQ, spare ribs and beans. The spare ribs, similar to baby backs. . . These ribs are probably the most tastiest that I have ever had. In addition to being tasty, these ribs were tender and the meat was falling off the bone. . . Hailing from Kansas City,
The VIP tickets, in my humble opinion, are well worth the price. The VIP tickets, unlike other food/wine festivals, lets you go in a separate line. The main lines in front of each of the booths can get quite long. These VIP tickets just allow you to walk right up. Other festivals that provide an early hour's worth of admission is not that special. Who really wants to get there early - we all want to be fashionably late! Personally, I hate waiting in lines. In addition, the VIP tickets also give you a goodie bag, with a T-shirt and other things. The goodie bag is not that great. Maybe it was better in 2009.
All in all, this is a nice festival. I am not missing 2010's. I wish Los Angeles had more BBQ festivals. I know a couple of years ago, the Gene Autry Center, near Griffith Park, had a BBQ event. I am always on the look out for BBQ festivals.
Los Angeles Barbeque Festival
Santa Monica Peir
http://www.labbqfest.com/
Tickets $10, $50 (VIP) 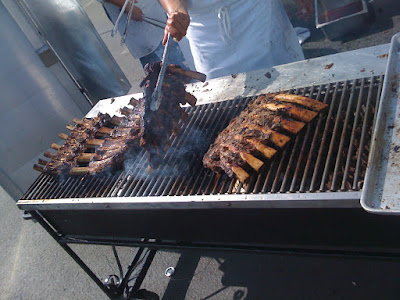 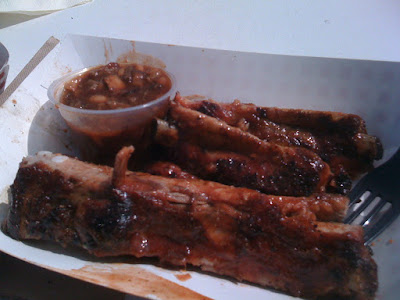