lets finger a taste of the frosting at Dots Cupcakes

Posted by The Thirsty Pig on August 25, 2009
In the spirit of Cupcakes - the third in my Pasadena trilogy of cupcakes - Dots Cupcakes. Recently I posted my thoughts about Violet's Cakes and Polkatots, both in Pasadena.

Each of these establishments have a couple of things in common. They all specialize in the current Los Angeles dessert fad - cupcakes, that's been going on for a couple of years now. Perhaps it is the simplicity of making process coupled with the great flavors they pack into a small package, that makes these desserts popular. And the other similarity is in their unique location. None of them have ideal locations. Violets is a few blocks north of Old Town Pasadena - which probably is the best for potential foot traffic of the three. Polkatots, located north of the 210 freeway in the back of a mini mall, which probably has the worst location of all. And then there is Dots, which is located just minutes away from Old Town, but is on the busiest street with probably the best exposure.

Dots Cupcakes, probably the most well known of the three - among my friends, has a nice little brightly colored shop. Inside, you'll find a large floor-to-ceiling clear cabinet of their cupcakes. The inviting cupcakes with the colorful frostings make you want to finger a little taste, like you did when you were a kid. There's a counter with a few stools for you to eat your cupcakes, so people that walk by can potential drool.

I had a mini cupcake of the Lemon Drop and my friend had her favorite Strawberry Shortcake. I was craving for something not too sweet and a bit tart. . . funny - kinda describes some girls I know. I like the mini's, like the ones at Polkatots. One thing I did like more was the airy cake. Not too sweet - again - and I like that. The frostings is not as pretty as Polkatots, but still quite good. Though the cupcakes at Voilet's had these great fillings - I don't know if Dots had them.

At the end of the day. . .I would rank - Violets as my favorite - though I wish they had mini's. Then I would select Dots, because of the convenience and the mini's. But Polkatot wouldn't be that far behind. 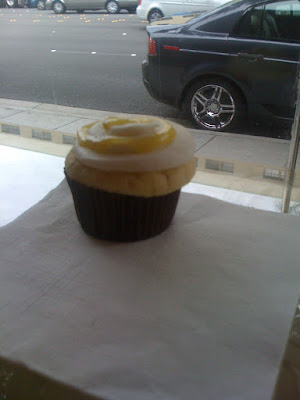 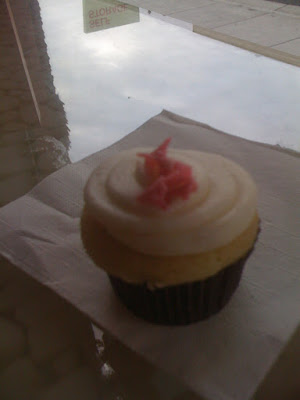 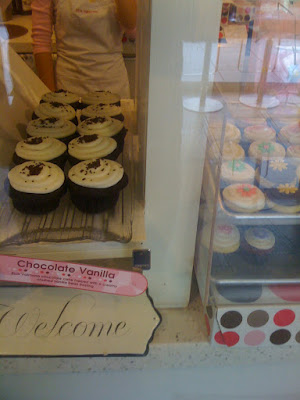 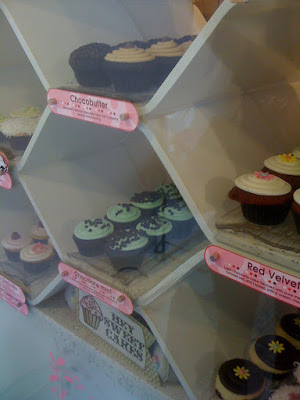 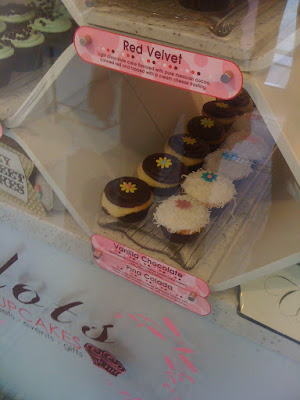