Posted by The Thirsty Pig on September 29, 2009
With a restaurant name like Animal, there's almost a sense of arrogance about what you think you do well - which is anything non-seafood or vegetable related. Man is instinctively carnivorous, making Animal the ideal place to eat when you want to return back to your roots. Many people have talked about this restaurant, since day 1, about their unique skill with beef, pork, and other land animal meat.

After looking at my list of restaurants to try . . . we decided tonight's the night. After fighting traffic, toward this part of town, I was happy get a nice imported Japanese beer. I strongly suggested that my friend get the Mexican coke - since it is made much sweeter than the American counterparts. The menu was quite simple & clear, and very much straight to the point with their "meat" selections. The menu doesn't try to fool around with fancy words and descriptions.

When I saw loco moco on the menu, I was immediately taken back by my Maui experience, last year, during my friend's wedding weekend. Though the loco moco I had, at this famous local hangout, was overwhelmingly large and intimidating with its enormity - it kinda scared me from future loco moco's. I had since not considered ordering it again.(I profusely apologize for my crappy English - I wasn't sure how to explain it) But then I see Animal's take, on this famous Hawaiian dish, with foie gras. After mulling over my other options, the Foie Gras in the Loco Moco just stood out. After a recommendation from our server - I knew I had to order it - it was almost destiny. Perhaps Loco Moco deserved another chance to redeem itself.

As some of you might know, the manner by which foie gras is acquired is quite inhumane. I was made aware of unethical treatment to our feathered pals, by my friend, who consciously chooses to limit her foie gras consumption to once a year. But on this plate - there were two very large pieces of foie gras. Personally, i don't really order foie gras and don't have a big craving for it either. But tonight, the foie gras stood out. With each bite of the loco moco - with foie gras, burger, spam, and egg, this combination made me understand this goose liver appeal. By itself, each of these pieces remain unspectacular, but together as one, like a fine ensemble, it plays out beautifully.

And did I tell you about the pork belly? And I almost had to fault my server for not even touching upon it while we were ordering. Later on, he did mention that critics and others have raved about the pork belly. He kept trying to push other appetizers. But the pork belly with kimchi, this easy combination, just screamed at me, more so than the loco moco. When it came, inside I knew I would be comparing this to Japanese Izakaya style pork belly. This dish excelled and exceeded with its crunchy fat. The fat on the pork belly also melted in your mouth with eat bite, and yet stayed crunchy as well. I think, "this is the best pork belly that I have ever tasted, Period."

In addition we had the bacon chocolate crunch bar, with anglaise. I don't have an idea what the anglaise is. But the combination of bacon with chocolate brought a new taste sensation in chocolate that I have never tasted before.

I think I will have to make another trip to Animal. I like this place. 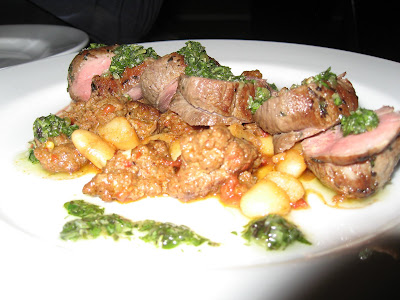 I don't even remember this plate. I think my friend ordered it. I apologize for the brightness of the flash. This restaurant is a bit dark. 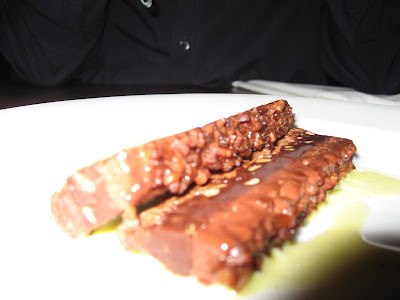 This is the bacon chocolate dessert. It was pretty tasty. I had never had anythign similar. 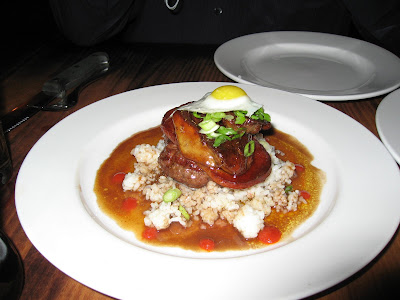 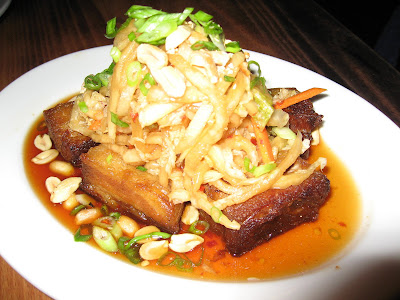 This is the best pork belly that I have ever tasted in my LIFE. It is so good. Its all about the fat in this dish. The fat is crispy and crunchy and then proceeds to melt in your mouth. 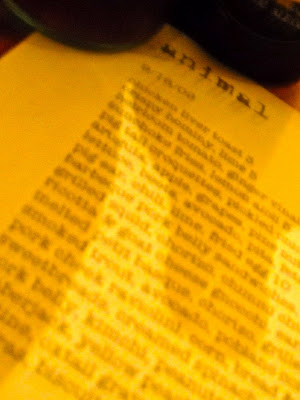 I guess you don't need a fancy menu at Animal.