Posted by The Thirsty Pig on September 23, 2009
I'm always on the look out for places that surprise me. Hot Stuff Cafe, with one of the more interesting names, surprises me in more ways than one.

Hot Stuff Cafe serves Westernized and European influenced cuisine to a local Chinese crowd. I was told that the owner is also of Chinese descent as well. As you walk in, the restaurant is a nice simple place with nothing special that jumps out. Being where it is located, I automatically assume that I will be eating something from a Hong Kong cafe.

Before I look at the regular menu, the drink menu indicates to me that this place IS a Hong Kong cafe. A Hong Kong cafe, mostly in Monterey Park and Alhambra, serves up westernized - club sandwiches, and Hong Kong style dishes - such as porridge, noodle soups, etc, for lunch and late night crowds.

Then my first surprise - the food menu has some nice pasta dishes, sizzling plate choices, and some decent appetizers. I wouldn't have expected this mix of selection from a place called Hot Stuff Cafe. I kinda almost was prepared to rib my friend about her choice in lunch places. After mulling over the menu, we picked the Beef Short ribs, the Orange Roughy, and had the unagi pizza for the appetizer. We finished off with the "Hot Stuff" Chocolate Cake.

The unagi pizza was a bit of a surprise. The waitress said that it was a popular dish. This pizza is very similar to a Japanese pizza - an Okonomiyaki. It had very similar flavors. I was in different with it. I thought it was ok. It wasn't something I would order again.

Our entrees came - the Orange Roughy and my Beef Short ribs. I was hesitate to order the fish, since I know that the Orange Roughy is on the endangered list. It looked good. I should have insisted to my friend not to order it. Anyways, I thought it was ok - nothing special or surprisingly good about it. Then my Beef Short Ribs came - and it WAS surprisingly good. As most of you know from my posts, I tend not to order beef. It was tender and slow cooked. The wine sauce was right on. It is something I would order again - but probably the only thing I would order again.

The dessert - the "Hot Stuff" Chocolate Cake was good to round out the meal. It was nicely presented. I didn't expect it to be that good - but it was good.

I wouldn't say that this place is overrated since I have not been here before, nor is this a place I would strongly consider going back again. Though i am tempted to try the Bacon Wrapped Filet Mignon on their sizzling dish. I feel that Hot Stuff Cafe is a nice place for dinner but not an ideal place for lunch. The selections for lunch are similar to that of dinner. 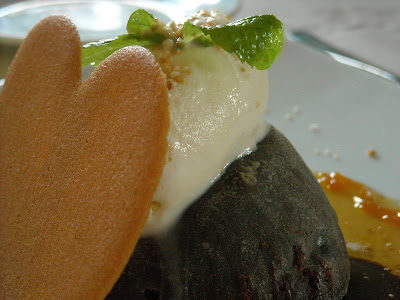 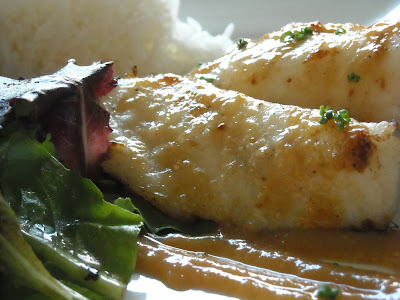 The Orange Roughy. I tried to tell my friend to save a fish. . . 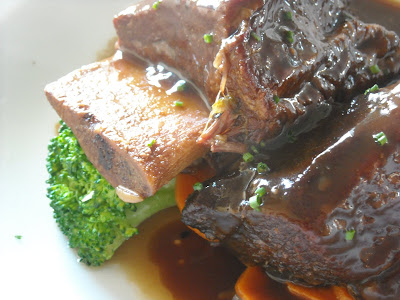 The tenderness of the Beef Spare Ribs. It was good. But I was told my friend had it when it was better. 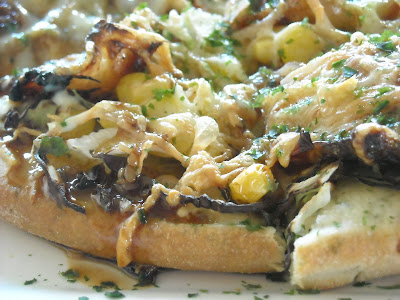 The Unagi Pizza. I should have known better than to order an Eel Pizza. 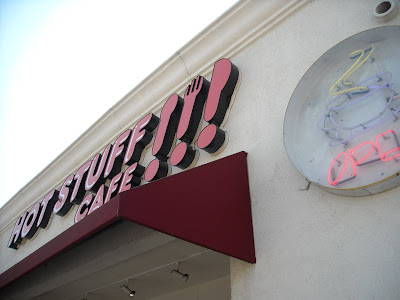