Looking for a great Jewish Deli in Downtown LA that is open Late! - Langer's

Posted by The Thirsty Pig on September 17, 2009
Langer's arguably makes the best traditional pastrami sandwich in Los Angeles. In my opinion they do have the best jewish deli sandwiches. I have been to Canter's, Nate N Al's, and Jerry's deli - but I know I am missing one or two in the Valley. I would even compare Langer's to Katz's in New York City. But I think Katz beats Langer's, by a hair. I like the service that Katz has better - where you walk up and order and the guy gives you a small plate sample of the meats. (oh gosh my mouth is watering). . . .back to Langer's

They have been around for over 60 years. I was reading, at one point, there were open late. When the neighborhood changed, for the worse, the owners, still the same ones, were forced to close early - at 4pm. I asked our waitress if they had thoughts about returning to dinner hours and late night schedules, with new influx of residents in downtown Los Angeles. And she still said no. I do hope they would consider opening for dinner and late night crowds. Hot pastrami sandwiches are great late night drunk fare.

I can't explain it, but pastrami beef is one of the few cured and prepared meats that goes good if sliced thinly or thickly. The thin sliced pastrami is what you find at the Hat of Alhambra, Tops of Pasadena, and Johnnie's of Culver City. The thick pastrami is the more traditional jewish cut, found at Canter's, Nate N Al's, and Langer's. Personally, I like the traditional thick cuts. I believe texture is quite important to the eating experience. Thin sliced pastrami seems to fall apart too easily when you pick it up and when you eat it. Sometimes when you bite into the sandwich the little pieces - might often be more tough than you want. Whereas the thick cut pastrami, is expected to have the same texture all around and won't typically fall apart. But I do like the Hat's dipped buns (in the au jus) which gives it a more juicy and squishy feel in your mouth. But for me, my ultimate preference has to be with undipped Rye bread with sauerkraut and russian dressing. For whatever the reason, this combination - which I had for the first time just recently, does it for me. The flavors just melt together in this perfect storm of tanginess, sourness, and savoriness - with this unique taste sensation.

Anyways. . . .just go Langer's. Make the trip out there. Deal with the crappy neighborhood and useless parking situation. You won't regret it. 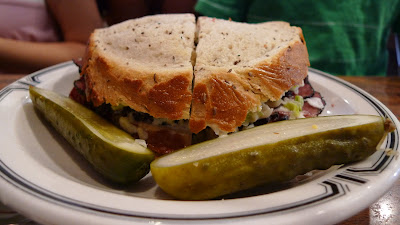 Check out this perfect pastrami. The meats are piled high with the coleslaw. Thank you Mr. B.Y. for this nice image. My camera couldn't get focused correctly. 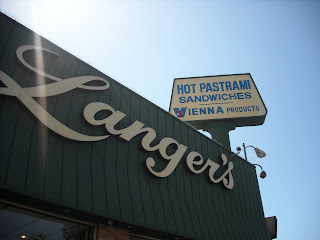 Here is the sign right outside near MacArthur park in Los Angeles. Unfortunately, their parking lot is a block away. 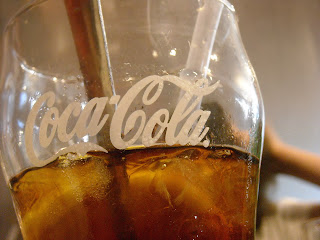 I love these old fashion coke glasses they still use. Same cool shape and all. 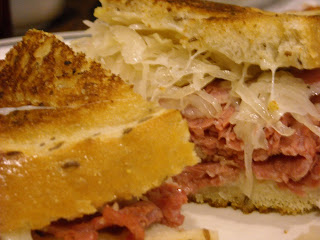 Check out the sauerkraut with the russian dressing. Amazing combination and taste. 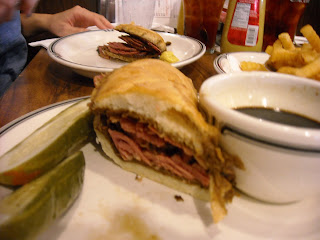 My friend got the juicy Pastrami dipped sandwiches. But I prefer mine with lots of mustard on rye. 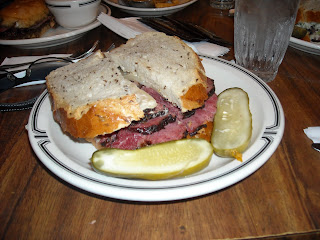 Here's my sandwich with the rye. The Rye bread's nutty flavor coupled with the mustard and savoriness of the pastrami give it a unique taste.