Posted by The Thirsty Pig on September 19, 2009
Tucked away in a food court, blocks away from USC, lives peruvian cuisine at its finest. I recently joined a newly formed monthly dining group that choose Mo-Chica for its first event. I didn't remember Mo-Chica's offering much from the Project by Project event, unfortunately either. All I was told, that we were going to a latin style restaurant near USC. Thus I was thinking hole-in-the-wall and something Mexican.

In this strange and somewhat industrial neighborhood, next to a large self-storage building and an earshot away from the 110 freeway, Mo-Chica serves great presentations of their countryman's food at almost a typical mall's food court's price. Valet parking is replaced by a plain clothed security guard. A Thai food, Mexican bakeries, and handicrafts booths dot the Mercado La Paloma, off the corner of 37th and Grand.

The simple menu, behind and above the counter, standout with the Seco De Cordero - Lamb, the Aji De Ballina - Shredded Chicken, Arroz con Marisco - Peruvian Seafood Paella, and Lomo Saltado - Beef. With our large group, we choose to order them all with some of their well known appetizers - the Ceviche Del Dia - today with halibut, Causa Del Dia - Potato salad, and the salad of the day. This caliber of food and presentation should be in a nice restaurant setting, rather than food court.

The appetizers, the Ceviche Del Dia and the Causa Del Dia were both exceptional. I admit I do not have much experience with Ceviche, let alone other Latin Cuisines except some Mexican, but it was quite good. The large pieces of fish in the ceviche, made me think that we were eating the potato salad before I took a bite. Then the Causa Del Dia - the peruvian potato salad came with its delicate presentation, was probably my favorite. It certainly didn't look like a regular picnic's potato salad. I could see the care that the Chef, Ricardo Zarate, does with all of his dishes. I do remember seeing him at the fabulous Project by Project July tasting event. You can see the care he takes in presentation and the quality dishware they utilize.

Tonight, on this Monday, the space was sparse and felt like a lazy Sunday. I was told that the Mercado La Paloma closes pretty early, around 8pm or so. But that did not deter us from our experience with the Seco De Cordero, lamb served on the bone. This was amazing tender with the meat falling off the bone. I don't usually eat Lamb, but this was an exception. My dining mates literally grabbed the bone and started barbarically feasting on the meat. The chicken - the Aji De Ballina was quite similar to that from El Pollo Inka link The yellow walnut sauce on the Aji, is a little off-settling if you haven't had it before. It looks like a fluorescent curry. The Aji is not something I would order first, here at Mo-Chica. The Lomo Saltado, better than expected, was one of the dishes I would recommend. I think the quality of meat could be tasted. Not of big fan of Paella, anywhere, my friends felt that it was one of their favorite dishes.

The purple corn tea and the cebada, the barley herbal drink was something to round off the meal. I liked the old fashion jugs they had with the drinks.

Tonight's event was a success in introducing my palate to finer Peruvian Cuisine. It is a hidden gem among the many other Latin food experiences here Los Angeles. 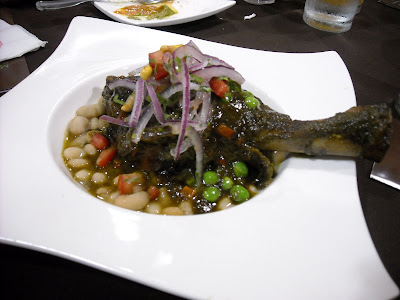 Mo-Chica offers entrees at less that $15 per plate - such as the lamb. 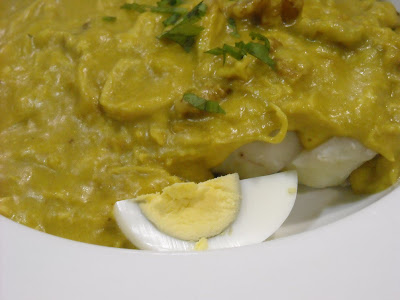 The yellow walnut sauce in the Aji De Ballina. 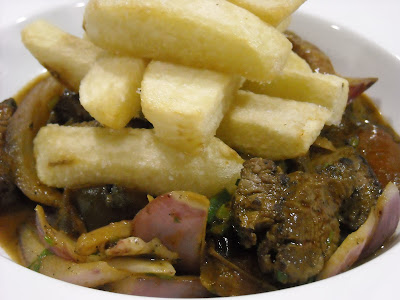 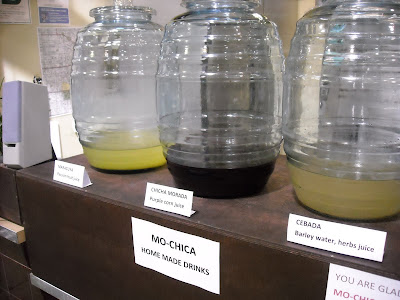 I had the Cebada - the barley barely drink. 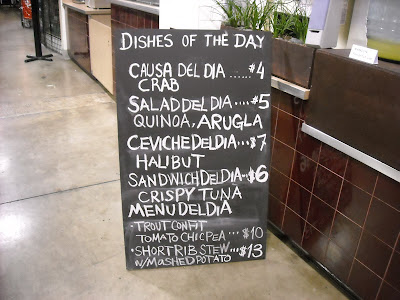 Too bad, they don't have a free standing location. One other drawback is that they don't serve alcohol. A good wine would go great with their menu. 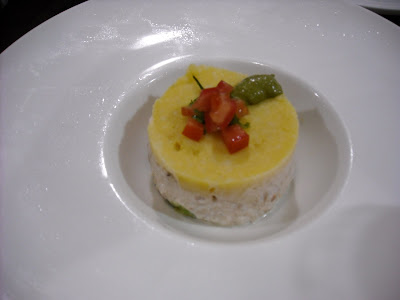 The potato salad. I'm not sure what the yellow coating on the top is. 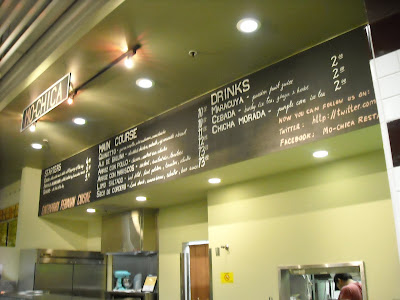 Open till 10pm, Mondays through Saturdays.