Posted by The Thirsty Pig on October 22, 2009
My experience with Indian cuisine started, in of all places, in Hong Kong. I went to 2 places when I was living there. Tandoor Indian Restaurant and Veda - both located in Central were my first ventures. I would recommend both to anyone visiting/living in Hong Kong. Veda's a high end Indian Restaurant that features a contemporary new wave style of Indian. While Tandoor is more of a traditional Indian restaurant that you'll find most any place.

Mahan is no different from Tandoor. But, according to my Indian friend, features a lot of dishes that you won't find together. Often times, Indian restaurants specialize in their geographic origin. But that's only natural for most cuisines.

On this day, we decided upon the lunch buffet. My buddy said that their spread was unusual since they offered many different things. They had Samosas, Aloo Gobi - vegetarian cauliflower, some sort chickpeas dish, Tandoori chicken, Palak Paneer - spinach dish, Chicken Tikka, and Naan - Indian bread. There was also some rice to go long with it. For an Indian buffet, I think there was quite a selection.

I try to go to a cuisine, that I am not familiar with, always with a friend who is much more familiar or is of that descent. I would not have known to dip the chicken in the yogurt sauce. Or have the samosas also in the other sauce.

I think for lunch, Mahan is great place to go, if you want to have something other than a salad or sandwich. Though the pricing is a big more than you would expect or want from lunch. Also, try their yogurt drinks as well. 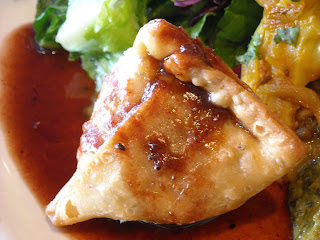 Samosas. I totally forgot the name of the sauce in used for the samosas. But I do remember it is red colored. 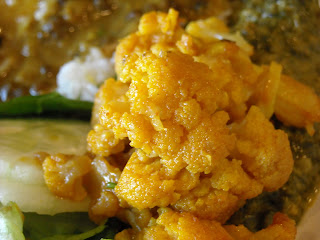 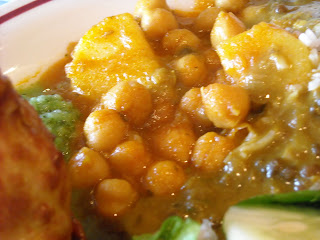 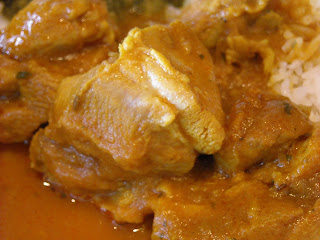 I think this was the Tandoori Chicken. 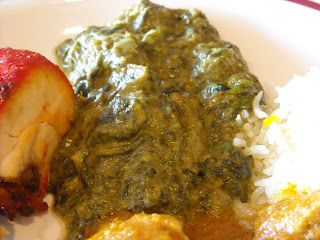 I think this was the Palak Paneer - spinach dish. 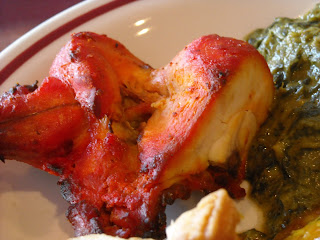 This had to been the Chicken Tikka - roasted chicken. I think it was a bit dry, though. 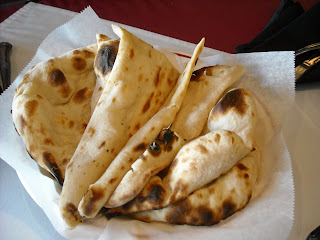 And I know this is Naan.