Posted by The Thirsty Pig on October 30, 2009
One of my first experiences, of many, at Tommy's was during my freshman year at USC. I was in the USC marching band, and they had a hazing ritual that included a trip to Tommy's with their famous chili. All the freshman were required to eat/drink a concoction with chili and root beer. The upperclassmen also added bits and pieces of the pepperoncini's, onions, fries, and anything else they could get their hands on. Luckily, I think, I just got root beer and chili. This rite of passage was special since the band often went to Tommy's after sporting events, gigs, and performances. 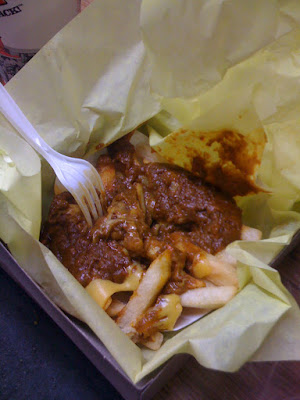 
This night, we decided to return trip back to Tommy's. Though I shouldn't say return, since I visit Tommy's at least 3 times a year. Personally, I think Tommy's is a destination place to bring out-of-towners to. Anyways, I digress . . . after going for drinks at some lounge bar, that was forgettable, I made the executive decision to stop by the original Tommy's on Rampart and Beverly. I often get mistaken for being Bossy by my friends. I don't understand why. Some people are just too indecisive when it comes to food.

Anyways. . . when we rolled up to the parking lot, my mouth was already watering - as it is right now when I am writing this. With regard to parking, there is plenty of parking in the main lot as well as the lot across the street. You'll find all type of cars on the weekends enjoying this find LA fare. I've seen busloads, limos, and people in cocktail dress here at Tommy. Then on the other side, you may encounter people that might be affiliated with ganges. At first it may seem a bit seedy or potentially hazardous, but its just people harmlessly enjoying their chili burgers.

Thank goodness Tommy's is open 24 hours. When you have that buzzed fix - there are few things near downtown LA that can squelch that craving. And when you order - don't think you are a man to have just meat, cheese, and chili. The whole package with the tomato and onions complete the meal. The combination taste, altogether, brings home this burger. I wouldn't have it any other way. The savoriness with the freshness of the tomato balances it out. The chili, though, sometimes gets lost in the middle when you squish the burger and the chili gets moved to the sides. So, make sure, when you hold your Tommy's burger, not to hold it too tightly or squeeze to hard.

Some of you may not know that Tommy's didn't always have french fries. Rumor has it, after Tommy pasted away, they added fries at the Original location. They have some of the best chili cheese fries with onions around. This type of Los Angeles chili, without beans, is unique in this part of the world. Texas chili often has beans and doesn't have the "bite" that LA or Tommy's chili has.

Make sure you also try the Tamale. Their tamale also has their chili with a large tomato slice. The masa with the chili makes a great combination as well. I think the tamale at Tommy's is my favorite side - even more than the fries. 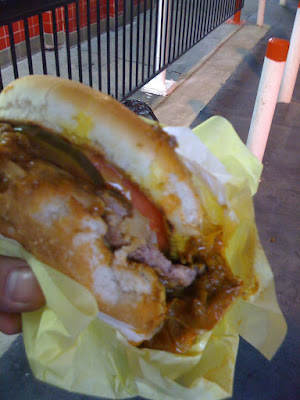 After one bite of their chili cheese burger. I was so hungry that I forgot to take a picture before I took a bite.

The tamale. Yummy. I strongly suggest that you try it.