Posted by The Thirsty Pig on December 30, 2009
I know I have been a bit lazy about posting this month. Anyways. . . I wanted to get this in before the end of the year. Liang's Kitchen is my new favorite local Taiwanese restaurant. I would almost say hole-in-the-wall. But they have 3 San Gabriel Valley locations. 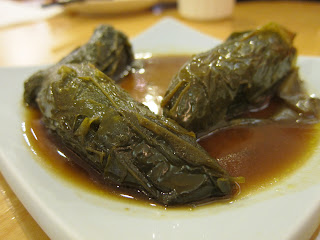 The No. 43 Stuffed Pork Chili. Spicy but so good. This is something you eat with rice. I think I have to order it every time I go. It is served cold.


In the 1st half of the last century, there was a large migration of Chinese to the small island country of Taiwan. Most were in the military following Chiang Kai Shek. They settled in little pockets in and around the large cities. They came together, in these communities, with their favorite home-style cuisines, from China. Their tastes were often simple, mostly noodle(from Northern China), and spicy. Liang's Kitchen celebrates this unique culture, different from familiar Taiwanese cuisine.

You'll find on their colorful menu rice and noodle items. Noodles are the preferred staple if you are from the northern part of China. Southerners prefer rice. Anyways . . .If its your first time, I strongly suggest that you get the Special Onion Dry Noodle. This simple noodle dish doesn't feature a meat nor is soup based. With a over easy egg, you mix the noodle with the egg yolk with its onion and Pork Lard sauce, which produces a tasty creamy consistency. Not too salty, with a little sweetness coming through. I have to be honest, I've order this twice already. So yummy. People would order the main Beef Noodle soup and say that Special Onion Dry Noodle is better. It's just a simple noodle dish, done well.

The other dish I wanted to talk about is the Stuffed Pork Chili. I like spicy foods, but I can't really take the spiciness. Served cold, these suckers are spicy, but not crazy spicy. It kinda creeps up on you. As I said before, this goes well with rice. This and the Special Onion Dry Noodles, are the two things I will order, when I come. I will almost insist my friends to try it when they come.

Anyways. . . I just wanted to share a couple of dish from Liang's Kitchen. 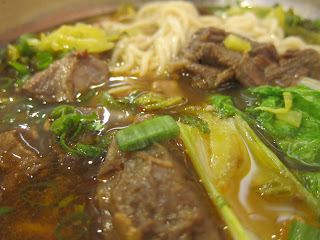 The standard traditional Taiwanese Beef Noodle Soup. Not bad, but there a better noodle dishes. 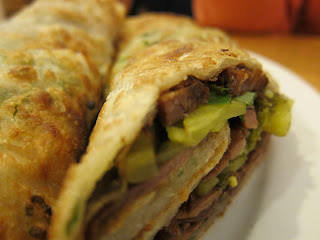 A Northern Chinese favorite - No. 90 Sliced Beef Wrap w/Green Onion Pancake. With the pickled vegetables rolled in a onion pancake. 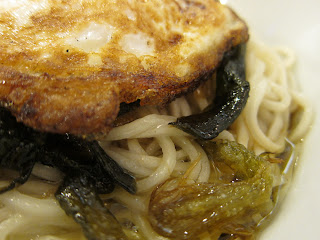 The Special Onion Dry Noodles. You can see the carmelized onions with the egg. Make sure you break the egg yolk and mix it up with the noodles in the pork lard. So Damn Good! 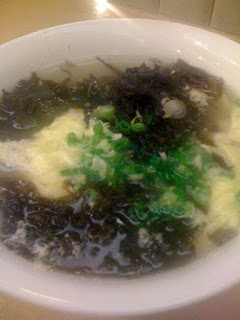 The Seaweed Egg Drop Soup. This was a bit too salty today. 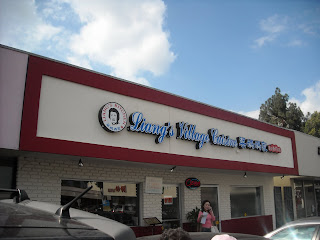 Unfortunately parking is an issue. 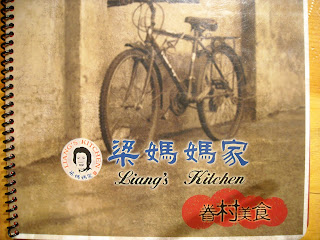 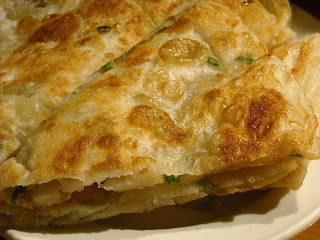 The onion pancake. I think they use the same batter for the beef onion rolls pancake. 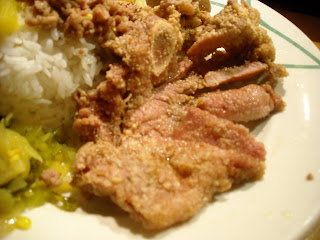 Pork Chop Rice. This is a well known Taiwan dish.