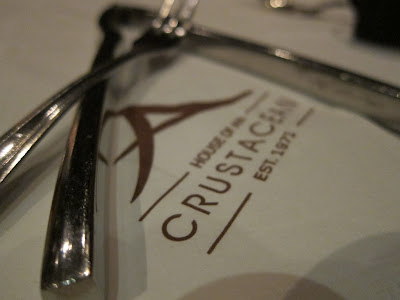 Our food adventure tonight brought us to Crustacean. Originally we had planned elsewhere, but we were too late in planning and couldn't get a decent time for the ten of us. Fortunately, one of us remembered an old favorite - Crustacean.

I don't usually crave red meat nor seafood with shells (like crustaceans), but in this case - I had to order An's Famous Roasted Crab with An's garlic sauce and secret spices as a Cracked Dungeness Crab. Two other friends ordered the same thing. Another order the Drunken Crab - Whole Dungeness Crab simmered in sake, chardonnay, garlic, and scallions, and yet another had the Dungeness Crab Out of Shell. We also had an order of the Whole Main Lobster with An's Famous Garlic Noodles. And three orders of the special fish of the day - seabass.

I had been to Crustacean before, but had ordered chicken or something stupid . . . without following one of my mantra's. One of my mantra's is to make sure you order what the Restaurant is known for, rather than think too much about something else. Once I was about to order chicken at Mastro's then almost getting laughed out of the restaurants by at Bachelor party dinner. Anyways. . . this time around, I knew I had to get some seafood with a shell.

So after mulling over the crab and lobster, I finally picked the Cracked Dungeness Crab. Yes, I was a bit lazy in getting one that was cracked, but not too lazy in not getting the Dungeness Crab out of the shell. I guess I was indecisive about it - not a good trait for guys. Anyways. . . I admit I was initially scared when I saw the beast staring at me, piled high on the plate with the big shell on top. This was a huge portion. Then I went at it. After a couple of minutes, I ignored my fork and shell cracker and went all out with my hands and teeth. I was cracking the shells, like a kid or an animal, with my jaw and almost sucking the meat out. I had the garlic sauce drenched almost to my wrists. Mr. F even got his watch band soaked with the sauce. I licked my fingers as if I was at home with nobody watching. Luckily, I wasn't the only one. The bibs did help, but not to my friends around as a shell whizzed past them from my feast. There was so much crab, that I wasn't able to finish it. . . such a shame.

But I have reason why I wasn't able to finish - two words - GARLIC NOODLES! In fact, that was the only thing I was looking forward to. I read somewhere that the matriarch of the family doesn't teach anyone how to prepare these noodles. She has a special room in which she makes the noodles herself. Crazy, but I wouldn't be surprised. These noodles have a butter taste and a perfect texture when you eat. . . not chewy or too soft. The simple meatless and vegatableless side dish is a must-order. I can't explain it anymore, but these carbs would make any Aktins practitioner rethink their diet.

I would also recommend not getting the mango lobster salad or the coconut tempura shrimp, not because it isn't good, but because you wouldn't have room to finish your entree. The salad has huge pieces of lobster, which we were arguing who should finish. The shrimp was also tasty with the fried coconut shavings, as an underrated dish.

What to Order: Crab, Lobster, Garlic Noodles
What not to Order: I wouldn't order the fish of the day from any place, including restaurants in Beverly Hills. But in this case, it seemed alright. 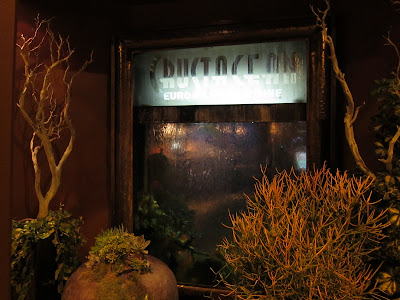 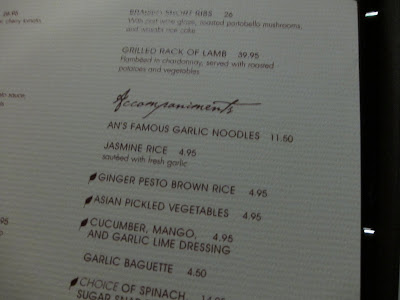 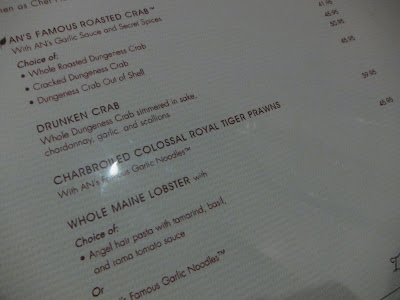 This page caused me to ponder my dinner selection way too long. 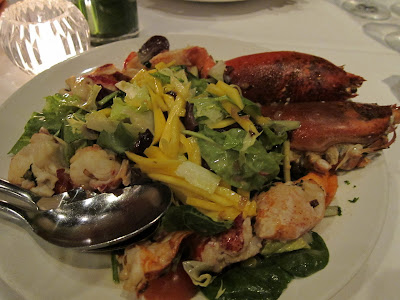 The Mango Lobster Salad. There shouldn't this much lobster in a salad, ever. 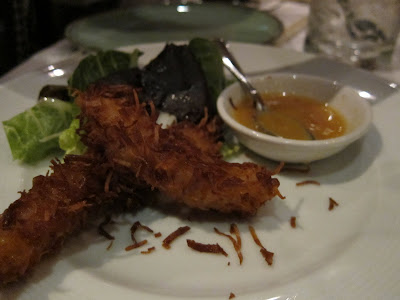 Coconut Shrimp. This was really good, but I doubt most of us would have remembered it. 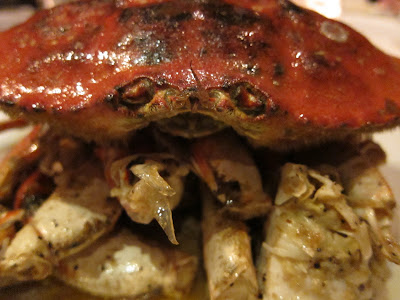 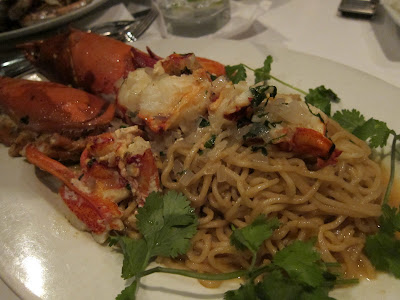 The Main Lobster. I think Mr. B made the right choice. 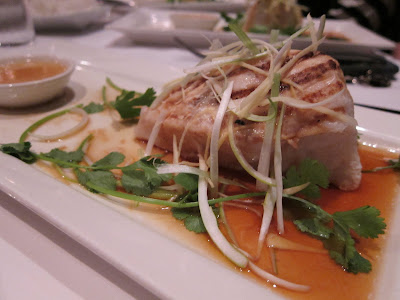 The seabass - fish special of the day. I rarely order fish specials. I think restaurants are trying to sell "fish specials" before they go bad . . . I still remember this note from Anthony Bourdain's Kitchen Confidential. 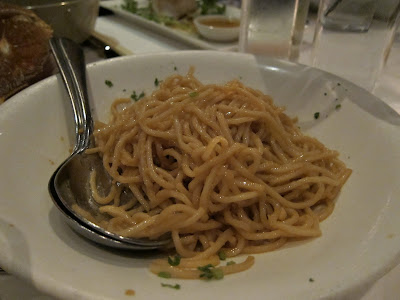 An's Famous Garlic Noodles. They don't look like anything special, but they are. 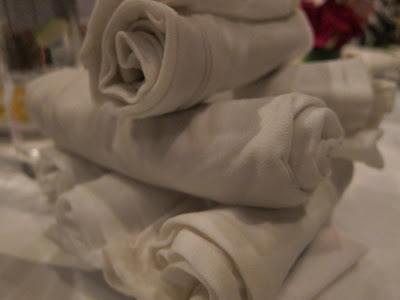 I had to take a picture of this. These were the hot wet napkins for apres dinner. 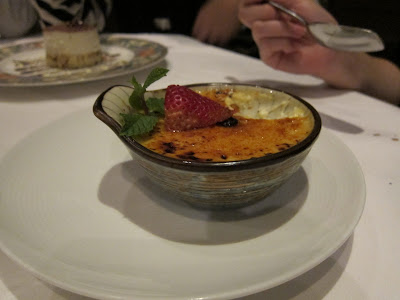 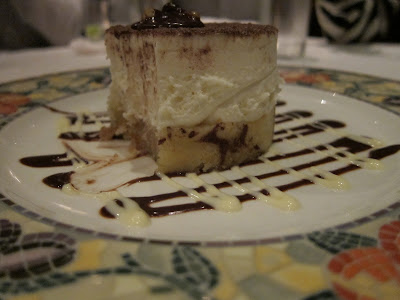 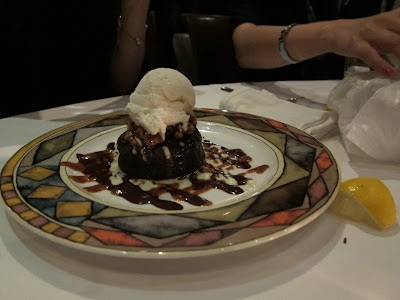 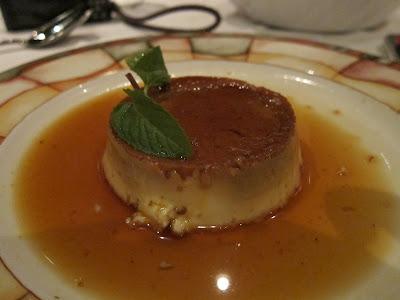 Dessert No. 4 Flan. I didn't have any dessert, unless you count a chilled shot of Patron. 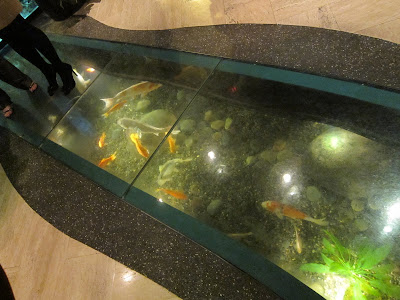 Their famous Koi fish stream running through the middle of their restaurant lobby.