Flying Pig is a regular at Downtown LA's artwalk - 2nd Thursday of every Month and Venice's First Friday (of every Month).

During a recent artwalk in Downtown LA, I stumbled upon the Flying Pig truck. I admit, that I was looking for other food trucks and the Flying Pig Truck was more of decision based on lines. The other truck's, the more well known ones, had longer lines.

But I must admit that I was pleasantly surprised. I ordered the braised pork belly buns, the tamarind duck taco, and the crab ball snacks. I would have order pork belly if it was in a pile of dirt. I noticed the people behind the scenes in the Flying Pig Truck were Asian, and deduced that they probably knew how to do pork belly. The little buns, like the ones you use for Peking Duck, wrapped itself around a chuck of pork belly. I could say it was succulent, juicy, and well flavored, as you could expect. But I liked the buns more. It was only a matter of time, before some truck was going to use the Asian (Chinese) buns as the delivery system for mobile hand held food. My next prediction would be the pita bread, if it hasn't been used already in a truck(but you can see at California Chicken Cafe). Anyways. . .These pork buns weren't even the best thing on the menu.

The Tamarind Duck Taco's were, IMHO (in my humble opinion), the showstoppers. The flavors of the duck were bold and came out nicely. I don't know what else to say, but to strongly recommend to try it. I may have wanted to try it in the buns, for the familiarity of the Peking Duck. And for only $2.50, it was a good deal.

Anyways. . . check out the Flying Pig. One of the better, unspoken food trucks.

What to Order: Tamarind Duck Taco and Braised Pork Belly Buns
What not to Order: Crab balls 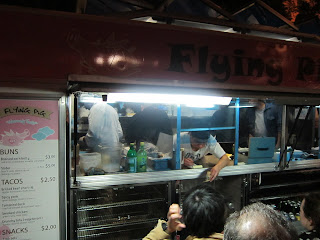 The Flying Pig Truck. I believe they are Korean owned. 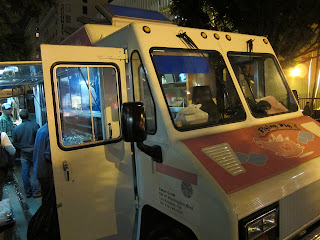 It's a tough market out there for Food Trucks, with over 50 trucks in the Southland area. But look for and follow the Flying Pig Truck. 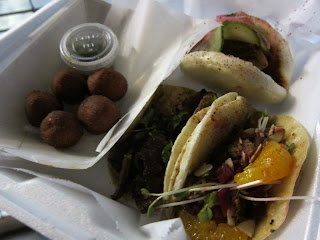 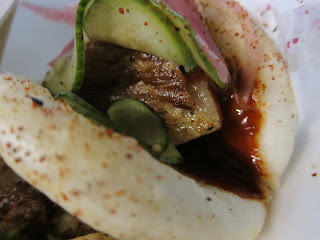 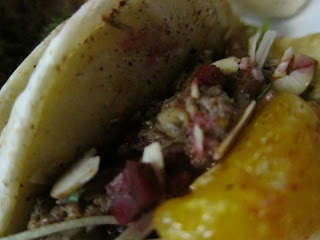 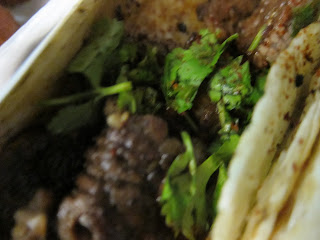 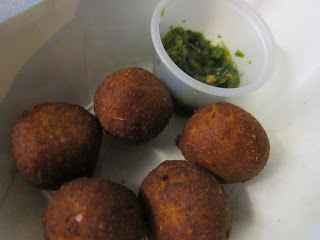