Cocktail of the Week - Er Guo To 二锅头 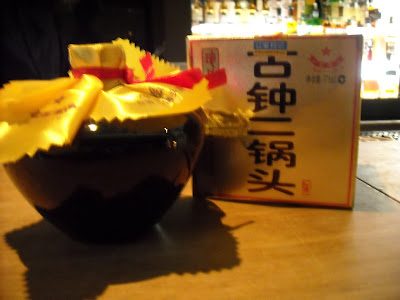 Just yesterday, I celebrated my birthday with some friends. I am quite thankful they all came out to the Silk Lounge. But there was a few that purposely wanted to get me drunk. . . .that I'm not that thankful for. So, loosely, as a rule - I get to pick the "drink." I choose a small bottle from the shelf called Er Guo To, from Beijing. After just pouring 10 half shots - the bottle only has about 15 full sized shots, I drag my friends over to the bar. Strategically, I quickly tell them to just down the shot before they get the chance to smell the potent drink. . .

Bottoms up and BOOM!

Watch their faces! WOW. . .that was fun. Each of them fighting for glasses of water or coke to wash away the strong taste. Oh gosh, I'm smiling as I recall this. Their faces cringe with this unknown bitter taste. Knowingly, the shots of patron or vodka won't come my way, unless this bottle is finished. I know, I'll be left alone, and hopefully sober, as I know I have the protection of Er Guo To. Er Guo To or Chinese White Wine (Baijiu) is usually 50% ot 56% alcohol (100/112 proof), sometimes 36% or 72 proof. It has the flavor, as described by my friends, as motor oil, bad vinegar, pure hell, medicine, and my favorite - ass! Heck, I know friends in China that won't touch this stuff.

A little history . . . I used to work and live in China. I used to be able to finish a bottle and half (each bottle about 500 ml.) Chinese White Wine (Baijiu) is made from a sort of Grain called Sorghum. Other brands of Baijiu is made from rice. Flavored with ginseng, walnuts, and other type of roots and nuts. . . this distince flavor is the drink of the People. Long before other types of alcohol, such as wine, beer, and other liquors, Chinese white wine has had a long history. Other well know brands of Baijiu include Maotai jiu, Gaoliang jiu, and Wuliangye. The strong flavor of the wine goes great with Chinese Hot Pot. The spiciness and the heavy vinegar is offset by the robust flavor from the wine.

Er Guo To means head of the second pot. Er Guo To has several different producers that claim this name. Er Guo To means a type of distillery - manner by which it is produced. Red Star is a strong brand in Northereastern China. You'll also find a type of Er Guo To in Southern China as well as Taiwan.

One of these days, I strongly suggest that you try Baijiu. My favorties are Er Guo To and Maotai Jiu.