Posted by The Thirsty Pig on August 21, 2009
Last night, after some K-town drinking. . .a couple of friends and I went to Carnitas Michoacan. I had never heard or been there, but my friends were raving about it. After considering Pinks, Kogi, and King Taco . . . they emphatically insisted on Michoacan. I had to admit that I was skeptical at first . . . but I wanted to keep an open mind about trying new things. And at the end, I was pleasantly surprised.

After getting somewhat lost from Chinatown, I finally found the place. This late night restaurant, in a part of Los Angeles that I rarely go to, is well lit and appeals to all comers - not just primarily latino neighborhood. Not far from the 5 freeway, Michoacan, well known among my friends - except for me. . . Sad, I guess I haven't been out as much lately. Inside the patio dining area, the large screen TV's mix with the chatter from the customers. When you finally order - you see their menu with different types of meats with either tacos, burritos, or tortas. One thing that I noticed were the nachos - super and the papa's. My friends insisted on the nacho's . . . and inside I was thinking boring nachos.

Boring is far from the experience of the nachos, here at Michoacan. They had large pieces of carne asada with melted cheese. . . and most of all was the mouth watering jalapeño peppers. I tend not to eat spicy food . . actually . . .I do eat spicy food. But I can't really take it. I will have one bite and starting bitching and moaning about the spiciness. But I do like to try it. But anyways. . . these peppers weren't that spicy. It was so good. I even had another large bite of the peppers. I just know it went well with the burrito that I had.

I don't know why my friends ordered carne asada burritos at a place called Carnitas Michoacan. I knew I had to order something Carnitas, so I got the carnitas burrito. OMIGOSH. . .the sauce, which is dark red in color, was awesome. I am not usually accustomed to any red colored (ass burning) sauce. But this sauce was great. Not too spicy. Just right, in fact. And you know what. . . the burritos need this sauce, it gives it a bite and more flavor. Personally, I like carnitas more than carne asada (I'm probably one of the few).

Anyways. .. check the place out. . .go there after clubbing and drinking. You won't regret it. On another note. . . there is nothing better than Orange Bang! Whipped, Sweet, and Yummy!!! I might try to add a little vodka in the future. 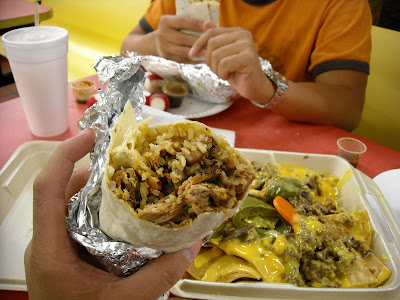 Check this awesome burrito - Carnitas Burrito. It is huge and tasty and you definitely need the sauce. 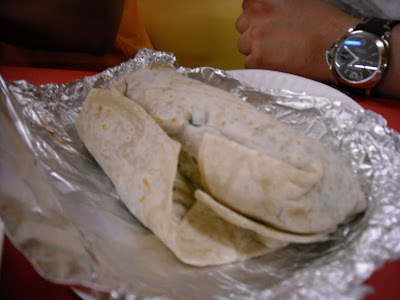 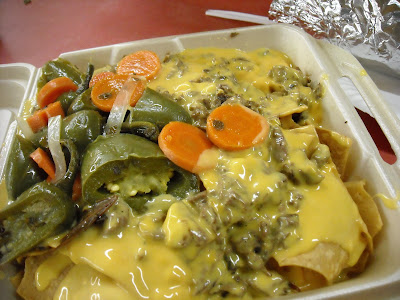 Here are the crazy carne asada nachos. I can't believe how good it was. Check out the large jalapeno peppers. 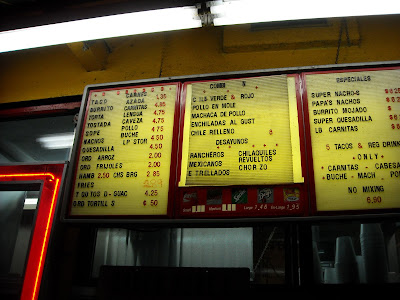 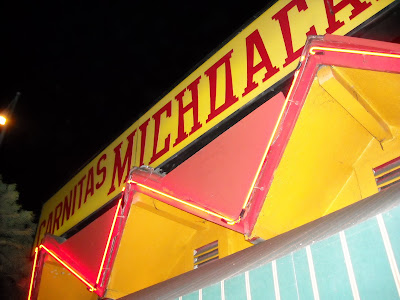 Right out side of Carnitas Michoacan.