Posted by The Thirsty Pig on August 16, 2009
The Hat is one of the places I have frequented for awhile, now. This old fashioned hamburger stand sits on the corner of Garfield and Valley in Alhambra. The Hat just celebrated its 60th anniversary a couple of years ago. Nothing's changed much, at the original stand, over the years, except the prices. The simple outdoor seating in the back adjacent the parking lot, that might have for the 50's style drive-in's.

The Hat is a local institution featuring Pastrami Dipped sandwiches, fries with gravy or chili, and other favorites. Written on their sign - the Hat's Pastrami Dipped Sandwiches are probably one of the best around. This type of hot pastrami is unique to the Los Angeles area. It differs from the thick cut deli-style New York sandwiches that you find at Katz's, Carnegie, Langer's, and Canter's. This fast food, thinly sliced, torta style, with au jus, on a roll offers a more juicy bite, as well as messy. The pastrami goes well with a slightly spicy pepperoncini balances out the salty beef meat. You'll find pepperoncini at most independent burger joints.

The other menu item that most people get here are the fries. Whether with chili, wet (with gravy), or just with ketchup, the Hat's fries don't get too soggy. They are the long and thick one that hold, or stick to, chili or gravy, well. Chili cheese fries with onions is common out here in LA, but wet fries (gravy) is quite uncommon. I would suggest that you try the wet fries at least a couple of times. . you might like them.
Another favorite here is the the tuna salad sandwich on wheat. Its a large soggy sandwich, well held together with wheat bread. This "light & healthy" sandwich is a nice change from the savory burgers and pastrami's.
They have a few locations - Monterey Park, Alhambra, Temple City, Pasadena, etc. Great little hole-in-the-wall. . .I only wish they were open late - till 2 or 3am for the late night cravings. 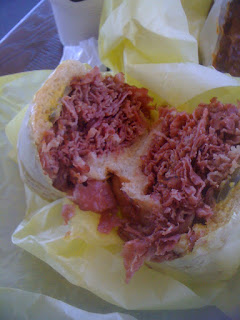 Check out this monster! The pastrami dipped sandwich on a roll. So different from the typical New York thick sliced pastrami's. 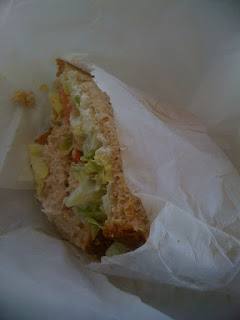 The "light & healthy" alternative to burgers and pastramis - the Tuna salad sandwich on wheat. This order with white bread is not the same. 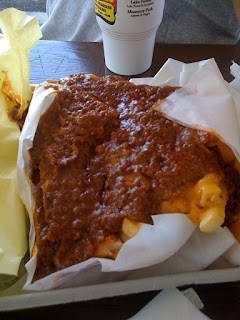 The chili cheese fries. If you look carefully, you can see the oozing cheese melting underneath the chili. Sometimes, I like to add diced onions. Southern California chili is much different from Texas chili, which tends to have beans. 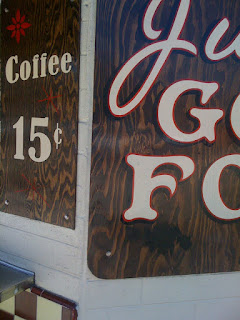 Old style signs that haven't changed in over 60 years. 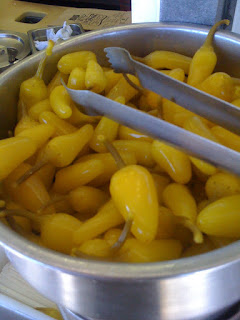 The bucket of pepperoncini. Though a bit spicy, they go great with the pastrami, burgers, and fries.