Posted by The Thirsty Pig on February 23, 2010
With such a name, as the Noodle House, you wouldn't know this is one of the best Tianjin 天津 cuisine restaurants. 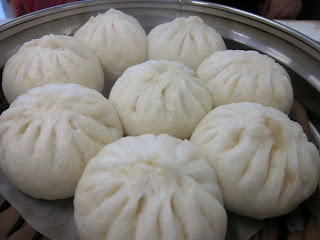 Tianjin is in Northern China, where noodles are the main staple starch in the area, hence the name - Noodle House. But we didn't have noodles, but ordered the famous Tianjin buns (Baozhi) among other things.

The baozhi is made from a flour dough and steamed with different fillings. The type of baozhi that we had, was filled with pork and cabbage. There are other restaurants that have Tianjin Baozhi, but at the Noodle House, they've brought it as close to perfection as I am used to. The filling was just right, pipping hot and with good subtle flavors. But the steamed doughy buns, not all too thick, nor too thin, was just right. You only need to dip the buns with a little bit of vinegar to enhance the taste. Though I'm sure there are those from Tianjin who would argue that they're not as good as they are, back home. The Tianjin baozhi, with a dry buns, would probably comparable to the Shanghai style steam dumplings, with a "wet" dumpling skin.

Baozhi and dumplings are rarely going to be the same as they are, from their hometowns, as pizza crust is difficult to duplicate. The key in producing proper baozhi, dumplings, and pizza crust is the water, which is mixed with the dough. The basis of a good mouth feel and texture derives from proper dough. That's why it is difficult to have New York style pizza in Hong Kong or proper Tianjin Baozhi in Los Angeles.

Also on the menu, we had the wine hardboiled eggs - similar to that of Tea Eggs, but made with wine. Served cold, these eggs were a good change in palate from the hot baozhi's. Tianjin is also know for their water dumplings - one of my favorite things in the world. Mr. B suggested that we have the fish water dumplings. I was hesitant, but relented. I thought there were ok, nothing special. I would have preferred some sort of pork water dumplings or something. I didn't like the filling of the fish filling from almost a paste looking substance. In addition, we had probably some of the best onion pancakes around. Usually the onion pancakes are thicker and more oilier. Whereas the Noodle House's are thinner and less oily. Thought I would have preferred it to be more flaky

I've had similar Tianjin Baozhi from Shaomai, and these taste so much better.

What to Order: pork and cabbage steam buns (baozhi)
What not to Order: fish water dumplings 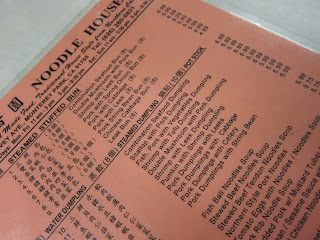 Straight foward menu. Easy to read and figure out. 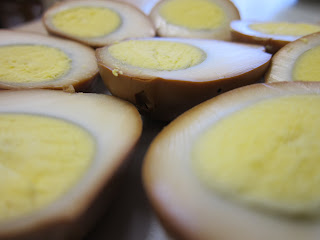 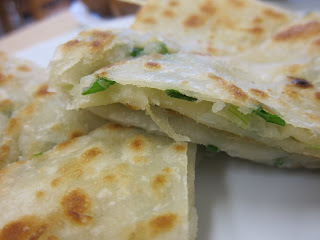 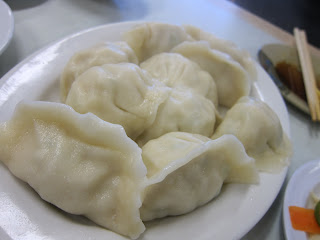 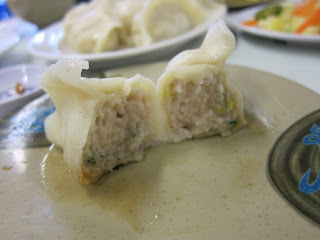 The fish fillings of the water dumpings. 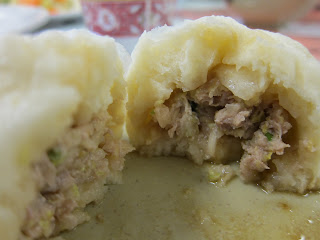 The Tianjin baozhi filling. I would return again. One of my new favorite lunch places.